This meeting was a "follow-up" to the previous meeting in March 2022 to assess the project progress in the development of a Herero Living Museum in Otjokavare. From our side, two things were essential. Firstly: Better communication structures must be created. Secondly: There must be a clear agreement on further cooperation with the Herero community from Otjokavare and a commitment to the concept of the "Living Museum" with all of ist interwoven principles.

The meeting was scheduled for 10:00 and started an hour late. There were relatively few people present, which is not necessarily a bad sign if there is a project group that is serious about it. We alerady knew many faces from previous project meetings – this is a good sign. The Conservancy simultaneously had a meeting in Kamanjab (100 km south of Otjokavare) and the members of Conservancy could not attend because of this. Unfortunately, Ibasker Murorwa, the Actual Manager of the Herero Living Museum was not present as he is involved with Small Mining shops on the Brandberg and was busy.

At the beginning of the meeting, we asked what had happened since our last project meeting on march 5, 2022. Looking back: At that time we explained the concept of the Living Museum again and provided numerous written materials for the Herero. This included one Folder with old, traditional Herero village plans that we found in the library of Namibia‘s Scientific Society, as well as numerous historical photographs that display the visible culture of the Herero (clothes, tools, huts). Furthermore, a place was found for the Living Museum. The next day, work started by creating the first structures, huts and the place for the sacred fire.

The background of the motivation boost and the work commitment at that time could possibly be the documentary filmmaker Jonas Spriestersbach, who accompanied us to work on a film project funded by the Federal Republic of Germany: a documentary about the creation of a living museum. Jonas had stayed two days longer in March and had helped out with transport and gas money to get film material.

We were told that not much had happened since the project meeting in March. On the contrary. The structures previously erected have decayed and need to be rebuilt. When asked why nothing happened, the following reasons were given:

The discussion about the main principle of the Living Museum (help for self-help, no financial contributions from the LCFN, many forms of support but not by money transfer, ...) was had again. There seems to be some confusion here as the promoters do not seem to be clear that the principle of the LCFN must apply even if the project is funded by GIZ. The Herero are of course aware of the GIZ funds that flow into other projects and have simply not yet understood that this has to work differently in a Living Museum. At the end of this discussion, we asked the community to accept that the LCFN would not provide purely financial help. After some “back and forth” and “if and but” the community now seems to have accepted this.

Secondly, we asked why they agreed on a museum site, which was then too far to walk (4km approximately). There seemed to be some misunderstanding here. It has until now not yet been accepted that, in practice, to set up the museum village as well as to go to work after the opening of the Living Museum it is necessary to walk and not be dependent on a vehicle.

We agreed to look for a new place closer to the village after the meeting which will therefore be simply easier to access.

After these two factors were clarified, we communicated that we would continue collaboration between the LCFN and the Herero community provided three additional conditions are met:

1. Communication: Reliable communication partners must be found. The previous communication with the community had been very difficult. On one hand, there were constantly changing project translators, and on the other hand, constantly changing mobile phone numbers for the chosen communications managers. In practice, this meant that we could hardly get in touch with each other because SMS or WhatsApp messages were not answered for weeks, etc. This has now been clarified and two new "communication managers" have been chosen who promised to be available for us (Veto and Chika).

2. Punctuality: We explained the importance of being punctual using our concept, which is always understood, namely that being late is seen as disrespectful to us (we waited over an hour for all the Herero to gather for the meeting). This was immediately accepted and promised for the future. We will see.

3. Authenticity: In order to ensure that the claim to the authenticity of the traditional representation is met, we had the community confirm once again that they are serious about the project. Here again folders were distributed that show the very old Herero culture. The entire community showed great interest and confirmed that it was this culture that they wanted to show in the Living Museum.

After these five very important points (development principle of the LCFN, accessibility of the Living Museum, importance of regulated communication, punctuality, authenticity claim of the Living Museum) were clarified, we went to the next development step towards a functioning museum: So how can we continue?

The community asked if we could organize the promised workshop with the Ovahimba. Actually it is still too early for this. The other Living Museums were already set up more independently when the LCFN decided to hold traditional workshops for idea and "skill transfer" (traditional techniques for the production of food, clothing, tools, devices of historical daily use, etc.). Nevertheless, this could help the Herero community to get a clear vision to finally push their project a bit further after more than a year. It was therefore decided to organize a workshop at the end of 2022, in which some of the Herero will travel to the Ovahimba Living Museum to take a look at the ongoing museum operations there and to acquire some manual skills from the Ovahimba.

The project leaders thought this was an excellent idea and look forward to this workshop.

After the end of the meeting, we drove to the old museum site, which - as already indicated above - was quite dilapidated.

Later in the day we found a very nice and suitable new site, which at 2km is much closer to the village and also a lot more attractive for visitors.

At the end of the project meeting, we unloaded the skins we had brought with us and thanked for the meeting.

We are roughly where we were in December 2021 when we had our second project meeting. However, there is now a clear commitment from the community to the concept of the "living museum". Five basic points of our development work could be clarified and an assurance could be obtained from the Herero that this will be accepted as the basis for cooperation in the future:

The workshop in the Ovahimba Living Museum will hopefully get the snowball rolling and send a positive signal towards community work. 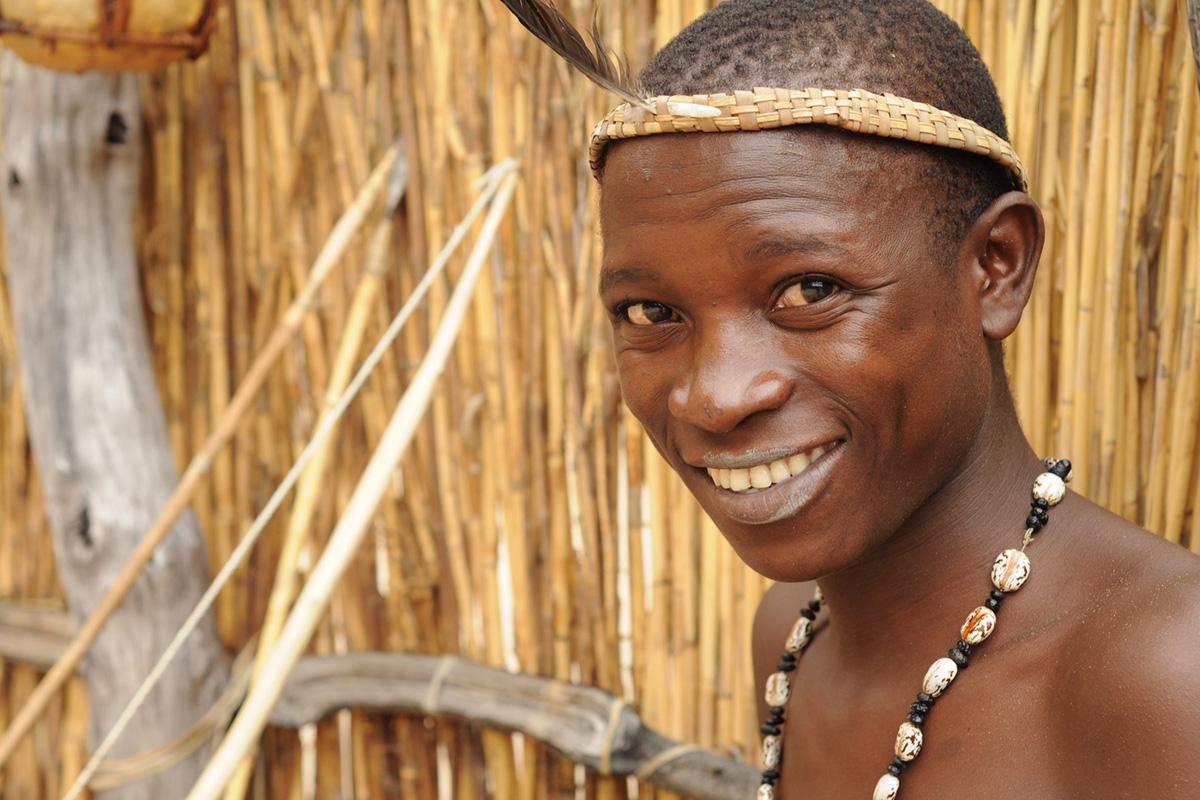